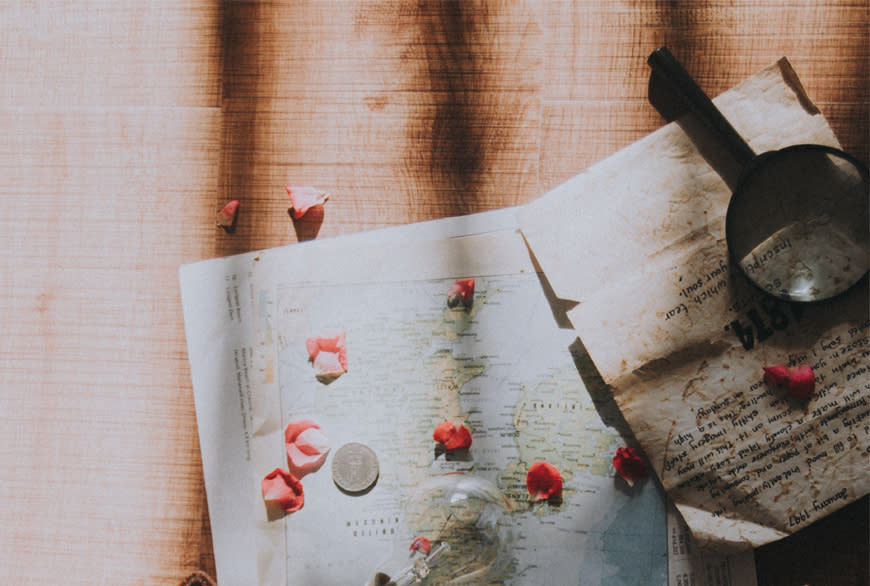 Novelist David Mitchell, in a recent New Yorker essay, talks about how, as a boy, he would draw imaginary maps as a kind of precursor to composing his stories. (Among these was one that mapped out the terrain of some heroic otters and the fictional world of Ottertopia!) Writes Mitchell:

These early maps were… what we now call a displacement activity. As long as I was busy dreaming of topography, I didn’t have to get my hands dirty with the mechanics of plot and character. Nor could I fail to produce my masterpiece if I hadn’t actually begun. While none of the novels I’ve published as a writer contain maps, my notebooks are littered with them. Scenes (or suites of scenes) need spaces to happen in. What those spaces look like, and what is in them, can determine how the action unfolds. They can even give you ideas for what unfolds. This is why mapmaking and stage-sketching can be necessary aspects of writing.

Don’t know about you, but when I read this I immediately thought: Service design! Why? Let’s talk about journey mapping—an activity much beloved among both designers and clients. For many people orbiting around the service design world, the map is the deliverable, the great enabling tool of customer experience projects. You can see their point: The journey map captures much that is essential in understanding customer experience and, used properly, can help point to ideas for improvement.

Let’s be honest: there is a huge measure of unclaimed human reality that must be edited out of a journey map for the sake of clarity.

What isn’t often seen are the many nuances that escape the mapping process. Let’s be honest: there is a huge measure of unclaimed human reality that must be edited out of a journey map for the sake of clarity. Creating holistic experiences for real people requires perhaps a different approach.

All of which makes me think about the idea of flat and rounded characters, as defined by novelist E.M. Forster (I am, you might have guessed, an incurable humanist). “We may divide characters into flat and round,” writes Forester in his classic book of lectures, Aspects of the Novel. Flat characters, he says, “are constructed around a single idea or quality: when there is more than one factor in them, we get the beginning of the curve to the round.”

To understand a customer or user or patient—the service designer’s “character”—as having more than one dimension is to make a move toward a rounded mindset. To do so, designers must train, or retrain, their vision to apprehend human dimensionality. One excellent way to achieve this is to study what I call the literature of customer experience, and then to borrow an author’s ability to see deeply into a given scene.

Which is to say: if you want to be a great service designer, you need to think hard about “the mechanics of plot and character.” When doing contextual interviews, strive to be, as Henry James puts it, “one of the people on whom nothing is lost!” Look at the scene, the person before you, and try to take it all in. This is a different procedure than creating a Rube Goldberg machine to shove clients further down the sales funnel; it’s about getting a precise read on the emotional atmosphere of people’s lives.

I know a talented veteran service designer who, despite having created many a detailed journey map for many a client, uses a special, damning word for this sort of commercial cartography: bloodless. This unnamed designer and I have had numerous conversations about how employing the literature of customer experience can be, ideally, a deep and immersive means of doing service design work. My own sense is that if designers took David Mitchell’s procedure—if they incorporated writing out detailed stories, in addition to map-making—they could produce some startling service design.

Consider, for instance, Italo Calvino’s beautiful description of what it feels like to buy and read a book: “You are about to begin reading Italo Calvino’s new novel, If on a winter’s night a traveler. Relax. Concentrate. Dispel every other thought. Let the world around you fade. Best to close the door; the TV is always on in the next room.” Calvino walks us through a vividly detailed prelude to reading: from seeing an ad for the book in the newspaper, to passing by the bookstore’s beckoning volumes, to unwrapping the novel (“Now you are on the bus, standing in the crowd, hanging from a strap by your arm, and you begin undoing the package with your free hand, making movements something like a monkey, a monkey who wants to peel a banana and at the same time cling to the bough”), to finding the right place and posture for reading: “Find the most comfortable position: seated, stretched out, curled up, or lying flat. Flat on your back, on your side, on your stomach…. You can even stand on your hands, head down, in the yoga position. With the book upside down, naturally.”

Sailing into the unknown waters of narrative is risky and can make people anxious. It’s been said that sea monsters lurk at the margins!

Imagine applying Calvino’s attention detail to, say, the retail experience you’re designing. Could you write such a narrative describing what it might be like for a real person to shop at a particular shop? What kinds things might they anticipate, good or bad? Or how about telling the story from a sale person’s point of view, or that of a store manager? A small anthology of such stories, filled with realistically rendered emotions, might do much to inform a client team’s understanding of your design intent.

Yes, I understand how unusual, and even intimidating, such a narrative project might be. Sailing into the unknown waters of narrative is risky and can make people anxious. It’s been said that sea monsters lurk at the margins! Learning how to produce such narratives requires a special kind of literary labor. Serious reading and serious writing aren't typically part of the design school curriculum. Thing is, narrative creation is, in fact, a key part of a designer’s job. You don’t just throw together a deliverable and hand it over to the client: you stand up at the front of the room at tell a story. Journey maps need explication. The question is: Do you want the story you tell to be a splashy comic strip or a deep and affecting piece of nonfiction about your client’s customers? This is where a commitment to narrative quality comes in.

Narrative quality requires an understanding of the two design elements: relentless emotional honesty in expression and scrupulous editing before publication. When you combine, say, the romantic notion of first-thought-best-thought and George Orwell’s stringent commitment to self-editing, you can teach designers to create better maps and stories. I advocate for teaching both, simultaneously.

We should remember that “experience” is the narrative that people, all of us, create before and after doing something. The construction of the narrative creates the experience. As Joan Didion, in a different context, once wrote: “We live entirely, especially if we are writers, by the imposition of a narrative line upon disparate images, by the ‘ideas’ with which we have learned to freeze the shifting phantasmagoria which is our actual experience.”

The “imposition of a narrative line upon disparate images” is a central—possibly the central—part of service design. And the rounder, fuller, richer narrative you compose, the more successful your design will be. So think, and think hard, about the stories you seek to create before and after you draw your trusty journey map—and then get writing. And let us know if, on your literary journey, you happen to bump into Mitchell’s otters.

Photo by Abyan Athif on Unsplash