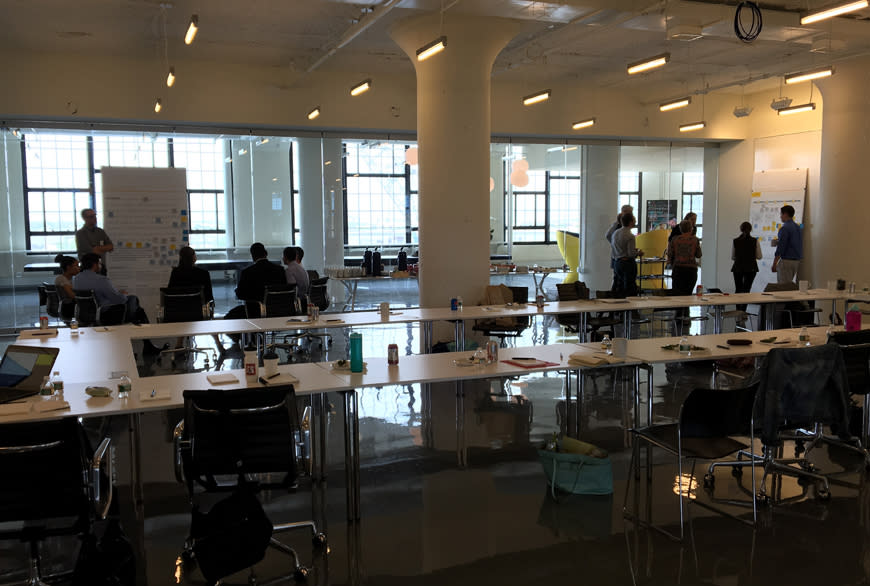 Is design a secretive activity?

Our relentlessly iterative work usually happens behind studio walls or in the cocoon of a project room, with regular breaks to venture out into the world to speak with people, collect data, and test our half-baked prototypes. We wipe off any traces of imperfection as a project steams forward, and by the time we present our final, polished work to the client, it gleams.

Design is in many ways a hidden process, one that often takes place offstage. But what if designers and clients and consumers all said: "Let’s see the magic!"? What if we sometimes designed in public? Could design be less like a hermetic activity and more like stepping onstage at a jazz club? Imagine what would happen if designers showed the world what they do, at every step of the way. What would be gained and lost?

Sure, it’s often in the interest of some clients and ourselves to ensure that design is, and remains, hidden from the public. But now some organizations are starting to understand that their customers value transparency, and rely on them to provide it. Rick Rundell, who oversees Autodesk’s BUILD Space, says: “Confidentiality is overrated in our industry. I have never seen a startup fail because of a breach in confidentiality.”

Imagine what would happen if designers showed the world what they do, at every step of the way.

The idea of designing in public has so much potential. If people saw all that goes into research, prototyping, and iteration, they would have a much greater appreciation for our work, and would be more knowledgeable consumers. On another level, going public would create a kind of accountability that might be extremely useful in civic projects—it would keep politicians accountable and citizens engaged—and might in fact help us better co-create with our clients.

At this point you might say: Yes, transparent design seems an interesting concept; but who’d be willing to try it out—from both a designer and client perspective? Might it ever occur in the real world?

Turns out, we did so in 2010 with Design Museum Boston. We helped the museum with its rebranding initiative, and we put the entire thing on the Core 77 website, inviting readers to weigh in, and vote on, various design concepts.

The museum’s executive director, Sam Aquillano, says on our Resonance Test podcast that the project made him “scared as hell,” but that it proved extremely valuable. In fact, we employed the idea of designing in public when we embarked on a recent project in which we helped the Boston Redevelopment Authority rebrand itself and reconfigure its organizational culture. The BRA project had its own WordPress website that cataloged all our learning and asked the general public for feedback.

Today, designing in public is a sign of courage.

Question is: How did designing in public become a thing? Part of it has to do with the widespread business interest in design, which can be credited to the legacy of Steve Jobs. So many people look at design as what augmented Apple’s tremendous business success. Another factor is, weirdly, reality television. On TV, we can see designers compete, in real time, on Project Runway in the same way that we see cooks improvising their cuisine on Top Chef. This kind of programming has made open-air creativity more and more familiar, and it’s easy to imagine farseeing designers and clients understanding this.

Such facility, and a willingness to put it to work, might just be the next stage for our best designers. I know there a number of them who could, given the chance, step onstage, and I would love to see them riff in real time before the public.

Of course, not every designer is ready for transparency, and neither is every project, client, and/or legal department. Designing in public requires a kind of courage, a willingness to sometimes fail, and enough optimism to ensure one can bounce back from a mistake.

What’s undeniable: there are true benefits to going public—for the entire design ecosystem. The notion that we must still completely protect the process from the wider world now seems, as the century progresses, increasingly quaint. In the meantime, those firms that dare to design in public, and those clients brave enough to give this a shot, distinguish themselves from the pack. Who knows: 10, 15 years from now, the idea of debating about designing in public might be laughable. But today, designing in public is a sign of courage. Do it—if you can—when you can.