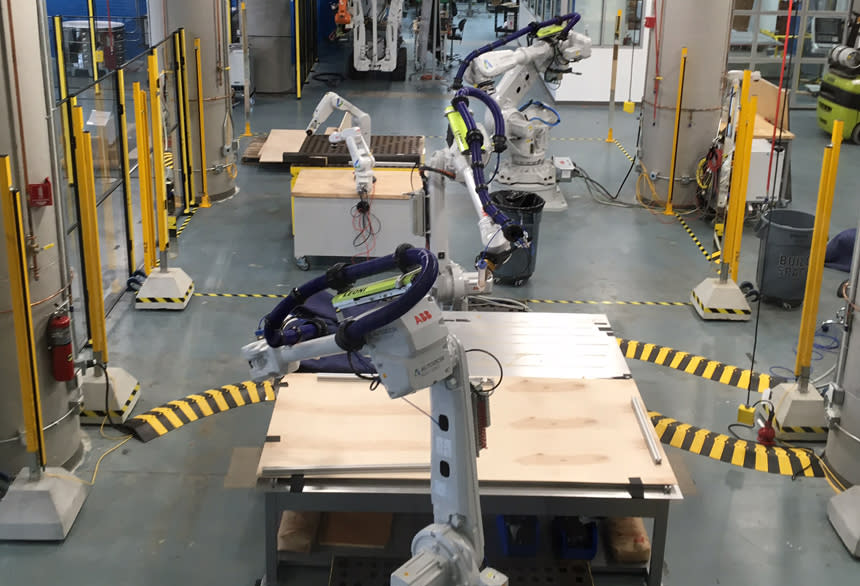 To get to Autodesk’s gleaming new BUILD Space—the acronym stands for Building, Innovation, Learning, and Design—I schlepp two doors over, from Continuum’s fourth-floor studio in the Innovation and Design Building, to 23 Drydock Avenue. The BUILD Space is 34,000 square feet of shiny, industrial-looking maker heaven. It’s stuffed with expensive machines, the sort that a cash-poor startup or grad school design team might never get near on their own… which is precisely the raison d’être of BUILD.

I’m there to meet Rick Rundell.

Rundell is, as LinkedIn reports, the “Technology and Innovation Strategist, Startup Mentor, and Senior Director” at Autodesk. What his profile doesn’t say: he’s an intelligent guy who (a) understands how impressive the BUILD project is; but (b) has been around long enough to distrust hype. You like that about him. It pairs well with his salt-and-pepper beard and stylish glasses and the way his answers strive to evolve into the best one.

For instance, if you ask: “What’s the coolest tool in the BUILD Space?” he says the “smart aleck answer” is “the people in the space.” This doesn’t seem exceptionally smart-alecky to me—but then Continuum is all about human-centered design.

Rundell then talks about “the community of innovation around the infrastructure we’ve provided.” Encouraging to hear a firm such as Autodesk express an interest in building a collaborative networked innovation group. So often, tech companies are all about keeping their secret sauce safely hidden behind a kind of ornate intellectual property chastity belt.

Rundell reconsiders the cool-tool question and does a little more iteration, giving what he calls the “obvious answer”: robots.

The BUILD Space’s robots, he says, are the “charismatic megafauna of the workshop environment.” It’s a fine metaphor, true and funny, and yet it’s unclear how seriously one is supposed to take it. What’s undeniable is that these enormous robots draw flocks of gawkers, requiring Autodesk to clean, again and again, handprints off the glass separating the big-armed machines from the robo-philes.

Robots are the charismatic megafauna of the workshop environment.

In short: Everyone wants to get their mitts on the stuff in the BUILD Space.

Rundell points to startup Pillar Technologies, a company that uses sensors to monitor construction sites for fire outbreaks, mold, and humidity levels. Pillar needed to improve the housing for their sensor package, to make it more versatile and nicer looking. In the BUILD Space, they brewed up “beautiful prototypes” in two weeks. “What they would have done here in weeks would have required them months elsewhere,” says Rundell.

But he’s not done talking about the question of cool tools. Not nearly.

The “practical answer” to the question is BUILD’s water jet cutter. It costs $350,000. It slices though “pretty much any material” with supersonic 96,000 PSI cutting pressure. “It can cut through 22 inches of titanium,” he says, and you remember sawing stuff in the basement with your dad’s tools and think, “Wow.”

Wow, indeed. That’s the point of the data point! Rundell knows this, I think. “We wanted to equip it to deal with anything you’d find in a building,” he says.

Warming to the topic, he recalls that some wise guy once considered the BUILD Space’s multitudinous offerings and asked, “What about upholstery?”

“Sh*t,” Rundell said to himself. “I do not have a sewing machine.”

Turns out, a team from MIT that was camping out at BUILD expressed a desire to use a sewing machine. So Rundell jumped up and installed one in the space.

Now, if you’re wondering about Rundell speaking publically about the groups who have brought their work into the BUILD Space—don’t. “Nothing in here is confidential,” he says. “We make it their job to keep it confidential. There’s no assumption of confidentiality.”

And yet, despite Rundell’s strong belief in open innovation, there is, at 23 Drydock, a real separation between the people using the BUILD Space and the Autodesk employees jamming away at their offices.

“One of my aspirations,” Rundell says, is for startups to “comingle with employees upstairs.” He adds: “Getting our teams down here to work with these folks would be pretty cool.” Sounds good to me.

Does the BUILD Space sound good to you? Drop by, and take a gander at the charismatic megafauna yourself.