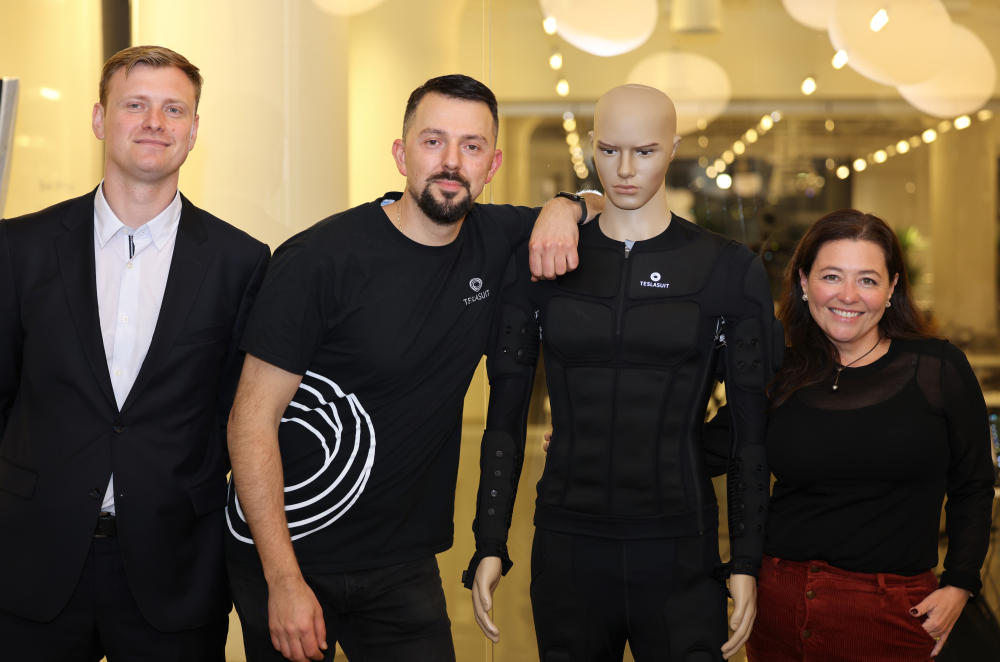 People don’t normally visit our Boston studio with a rack of superhero outfits. But this is exactly what happened on a recent Thursday afternoon: Sergei Nossoff, CEO of Teslasuit, and Andrei Pyko, who runs the company’s research team, dropped by to demo their sleek black haptic feedback garments. After permitting a few lucky people to suit up, get calibrated, and venture into VR land, they conducted a spirited conversation with Elaina Shekhter, EPAM’s Chief Marketing and Strategy Officer.

The trio talked about how the suit was originally conceived of as a video game accessory (Nossoff said that his CTO originally sought to “create a suit that would provide extra sensations during gaming”) but it’s currently used for (1) XR training and motion capture; and (2) medical and healthcare applications.

The task of the technology, said Pyko, is to get people deeply involved and forget that they’re zipped into a suit or a VR environment. “There are a lot of emotions just wearing the suit,” he said and added that donning the suit can prompt people to ask, “Am I a superhero?”

Zooming out, Shekhter noted that EPAM’s investment in Teslasuit, like our other recent investments, focuses on "identifying unique, technologically driven propositions that present an opportunity for EPAM to accelerate the company either through our own product development expertise or to act as a channel or as an integrator for a large number of our portfolio customers across multiple verticals.”

The portfolio of this conversation included such topics as Teslasuit’s current business model (B2G and B2B enterprise training services), their partnership with the Hospital for Special Surgery (Nossoff said the aim of the HSS partnership is to “create a product to allow patients to be treated remotely as well as be diagnosed remotely”), and how PII data and privacy factors in here (“So far, we do not have medical certification but we are working towards it,” said Pyko).

Where might Teslasuit be walking in the near future?

“In the longer term, we can really use this technology for the consumer market,” said Nossoff. He’s not necessarily thinking about video games, but fitness and wellbeing and yoga.

Shekhter joked about Teslasuit working with Louis Vuitton on yoga clothing, and Nossoff talked about pajamas for older people to take biometric parameters to prevent heart attacks during sleep and industrial PPE use.

All agreed that deep tech smart wearables have a future. And it might be a luxurious future at that.