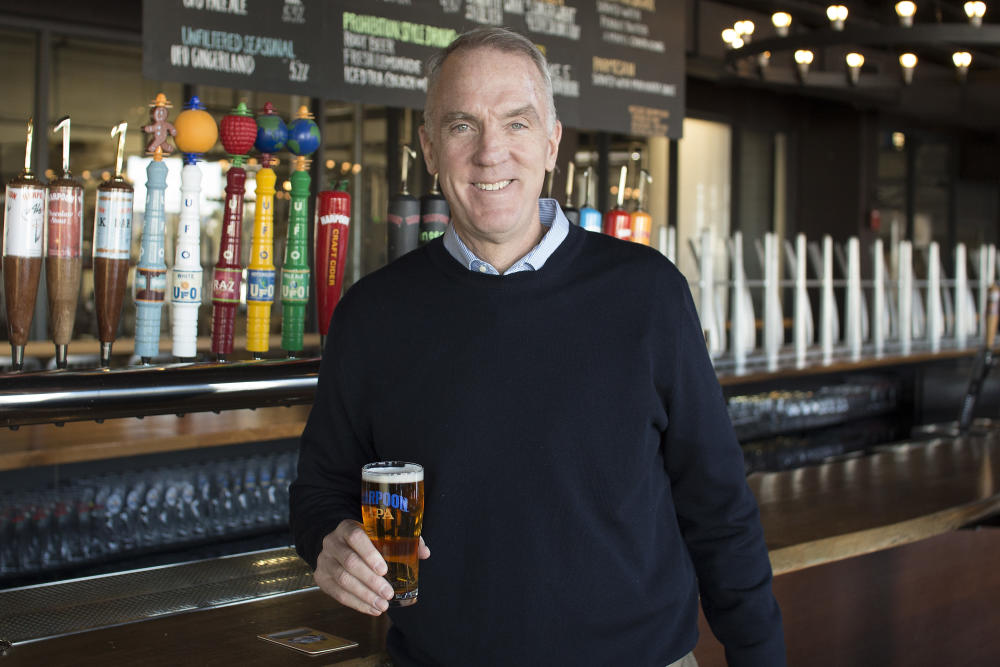 It’s just after three p.m. on a Friday in June, and there’s a pint of, um, chocolate peppermint porter on the table in the Harpoon Beer Hall. The innovative beverage goes down smooth and pairs well with the story Dan Kenary, Co-Founder and CEO of Harpoon Brewery, is pouring out here in the heart—the liver?—of Boston’s Innovation District.

Kenary has been making craft beer here since 1987, and right now he’s telling me about neighbors such as John Nagle Co., a family fish-processing business that’s been working in the Seaport since 1887. The Nagels, he says, were helpful friends and colleagues back when “we had no f-ing idea what we were doing.” He then ticks off a list of other good Innovation District pals. Roman Kern of MassChallenge. Jim Jenson at the Blue Hills Bank Pavilion. Jim and Norm Stavis of North Coast Seafoods, Inc. Richard Stavis over at Stavis Seafoods.

“Sam Adams [beer] is in your building,” he says, making me even more interested in Continuum’s new home, the Innovation and Design Building.

Our company has only just moved in, but we already recognize that this area supports a diverse business ecosystem, quite distinct from other regions of Boston. “In Kendall Square everyone is in biotech or [at a] private equity firm,” Kenary says, but an alert observer in the Innovation District will notice guys landing fish on the Fish Pier, guys in rubber boots making beer, and “guys like you. Designers.”

Kenary and Harpoon take a human-centric approach to their business. People, he says, are “the most important thing.”

One of the things you immediately like about Kenary is that he truly admires and appreciates blue-collar workers. He believes that people with a high school education shouldn’t have “hotel doorman” or “valet attendant” as their sole career options. Kenary says there are great blue-collar jobs and that one can earn a nice living by working at Harpoon.

Kenary and Harpoon take a human-centric approach to their business. People, he says, are “the most important thing.” As though to illustrate the point, in 2014 Harpoon moved to an Employee Stock Ownership Plan (ESOP) and gave 48% of the brewery to its employees. “Since we completed the ESOP two years ago, there’s an additional sense of mission to prove that sharing the wealth is an effective way to run a business,” says Kenary.

When asked: “Can you point to any business results that occurred because of ESOP ownership?” Kenary responds honestly and says he’s seen, anecdotally, greater involvement and engagement, but has nothing quantitative. “On the production side, where we do track, we’ve never been better.” Harpoon is now in the second year of the ESOP experiment and Kenary says there’s a “to-be-determined factor” involved.

A degree of employee skepticism is, of course, natural. “Everyone brings their own experience and baggage,” he says. “Some people come in skeptical because they’ve been [misled or] mistreated at other companies.”

But Kenary is extremely keen on building trust, and one way he does this is by involving employees in the innovation process.

The company will cook up some interesting new idea—chocolate peppermint porter, let’s say—and put it on tap in the Harpoon employee lounge. “We’ll judge how that goes,” says Kenary. If it succeeds with employees, Harpoon will run a pilot batch and put it on tap in the Beer Hall, which, by the way, only launched in 2013. (Note: The Beer Hall’s warm pillowy pretzels are outstanding; Kenary estimates that they sell 12,000 a month.) If a brew rocks the Beer Hall, they’ll bring it to the Imbibe Committee, and if the Committee pronounces it a winner, Harpoon will try it on an account in Boston.

Kenary reports that nearly 500,000 people visit Harpoon each year—300,000 in Boston and 170,00 at their Windsor, Vermont locale. “We get a real combination of locals [and] visitors to Boston, from New England, from the rest of the U.S., from people who’ve known Harpoon their whole lives to people who’ve never heard of Harpoon.” These visitors allow Harpoon to do regular consumer testing. “Before we opened the Beer Hall, it was really expensive to do it,” he says. Now, if the company wants to talk with people about, say, proposed packaging, it’s pretty simple: “Go in the back room and offer them a free round.”

Sipping a drink, dipping a pretzel in the wonderfully spicy mustard sauce provided by the Beer Hall, one notices that Kenary doesn’t quite fit into the room’s demographic. It’s a young boisterous beery crowd—and Kenary acknowledges the incongruity. “Our marketing and packaging is not designed for me,” he says. “Which is great. I love the people and what we’ve created.”

I survey the happening Beer Hall crowd, and am reminded that one of the reasons Continuum moved to the Innovation District is get closer to the city’s amazing talent pool. What does Kenary think about diving into it?

“So many young people now live in South Boston,” he says. “There is a great talent pool right in our backyard here. A ton of people live in Southie.” However, Kenary adds, it’s a challenge. “Boston’s become so freakin’ expensive,” he says, and then goes blue again: “The people on the production side are having to move further and further away to afford housing.”

But a strong business, such as Harpoon, learns to roll with any and all changes. For instance, when Harpoon’s co-founder, Rich Doyle, departed from the company in 2014, Kenary easily stepped into the solo CEO role. And this afternoon, he seems so engaged, so happy to talk about his story and his community that I can’t imagine him ever retiring.

But I want to know for sure, so I ask how long he plans on spending with Harpoon in our very cool Innovation District.

To which one can only respond: Cheers, Dan!