Getting to the Future
Continuum 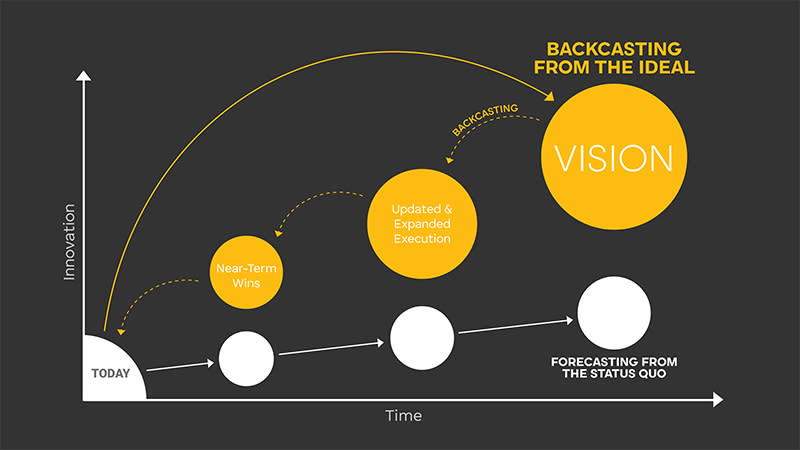 The fastest way to the future starts with knowing where you’re going.

Today’s innovation teams are often hyper-focused on experimentation. They challenge themselves to rapidly build, test, and pivot along the way, regularly adapting to changes in the marketplace. However, without a clear vision of how they need to evolve, this experimentation often goes the way of natural selection, with only the fittest surviving after a long (and expensive) battle. Some ideas are good, and help a company gain a competitive advantage, but most of the ideas are crap—wasted time and resources that get filtered out because they provide no evolutionary benefits.

Backcasting is how we establish a roadmap to the future for our clients. In concept, backcasting is actually quite simple, while in practice, it can literally be rocket science (at least in some cases… more on this below). The methodology behind backcasting is something we’ve developed over three decades. It’s a methodology that can be boiled down to three critical steps that are crucial to enabling successful transformation for organizations:

2. Envisioning a Future State Solution that Lives Outside of Today’s Constraints

3. Backcasting a Path Toward the Future State

One of the most iconic examples of this methodology is the Moon Shot: President John F. Kennedy’s 1960’s challenge to safely send an American to the moon before the end of the decade. The United States was able to succeed at this momentous effort because it:

1. Identified a Meaningful Problem to Solve

Recognizing that the USSR had taken the lead in space travel, and that this placed the U.S. in a vulnerable position both from a military and technology leadership standpoint, President Dwight D. Eisenhower created NASA in 1958 with the goal of “equipping the United States for leadership in the space age.” This clear articulation of the problem was the catalyst that enabled the country to commit significant resources to space exploration.

2. Envisioned a Future State Solution that Lived Outside of Today’s Constraints

Rather than setting his sights on catching up with Russia’s space program, President Kennedy reframed the challenge in his now-famous Moon Shot vision, changing NASA’s focus from what was possible this year, to a goal that was beyond their immediate planning horizon.

3. Backcasted a Path Toward the Future State

Starting with the end goal in mind, NASA’s engineers backcasted an innovation map that would get an American safely to the moon and back in 1969. By backcasting the path forward, NASA changed its innovation trajectory, properly broke down the steps required to accomplish its vision, and pulled ahead of its competition. 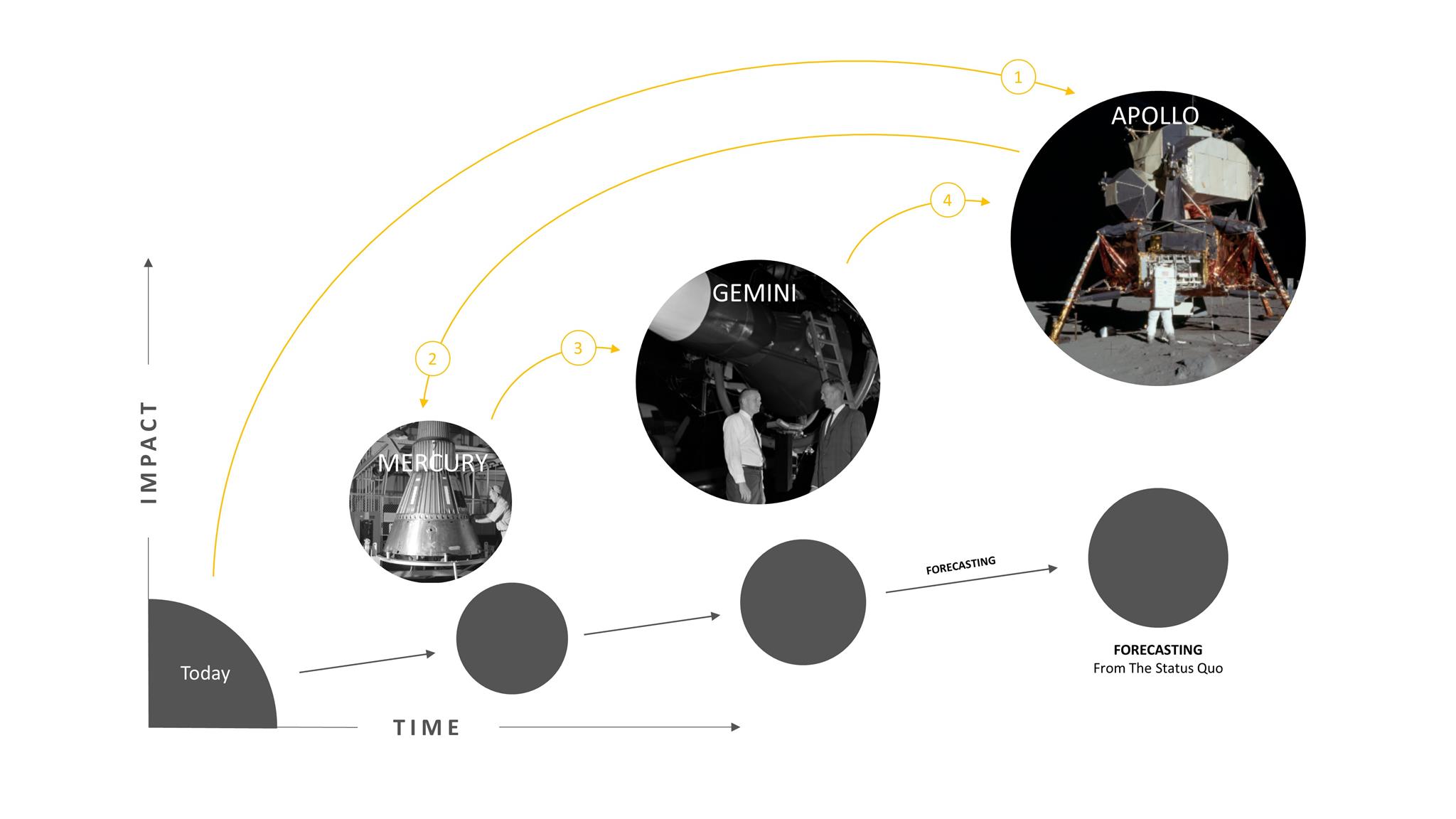 The Moon Shot is a great proxy for business. Organizations today are under regularly changing competitive threats. The typical response from most is to focus on directly addressing any given threat. It’s akin to racing to put someone into orbit after the USSR successfully put the first human into orbit. The response tends to be short-sighted, and focused on catching-up or barely staying ahead of competitors.

These responses tend to be grounded in where the company is today as well as in the immediate market changes and competitive threats it faces. We call this “forecasting”: Defining your next move based on where you are today, what’s gotten you there so far, and shifts in the market. The challenge is, the next move is all based on the past. It’s like driving while looking in the rearview mirror. Forecasting leaves most companies battling on the same playing field as their competition as they strive to win quarter by quarter. It also stifles innovation, as organizations try to move forward within the immediate confines of today’s business realities.

Leading organizations, by contrast, tend to have very clear visions of where they are going, and they use that vision as a navigational beacon and to help them backcast an evolutionary path that changes their innovation trajectory, setting them apart from their competition. Done properly, backcasting provides a clear roadmap of what an organization must accomplish, and enables an organization to lead the market, rather than chase it and the competition. By providing clarity on what needs to be done this year, and for the years to come, backcasting helps an organization move in the right direction. Compare it with some of the agile efforts we’ve all seen at play, where constant pivots, without a clear end state in mind, most often result in a failed innovation initiatives.

Adaptation without a vision, à la natural selection, results in an extreme number of failed experiments, and wasted time and resources. Whereas strategic adaptation, adaptation with a vision, with clear intent, dramatically reduces the amount of failed explorations, shortens the path to the future, and helps companies successfully transform and lead rapidly evolving markets.

Establishing a compelling future vision and a robust roadmap to get there requires an organization to embrace a few Truths in Innovation that we’ve learned over the years:

1. Understand that Most Ideas Are Crap

Oftentimes, organizations will take comfort in the number of new ideas they have without enough scrutiny around the quality of those ideas. This causes two problems: (1) It creates a false sense of security in the sheer volume of ideas a company has; and (2) It causes paralysis as organizations don’t know which idea to work on. Our advice: Accept that most of those ideas are crap. Worse yet, embrace the fact that it’s hard to tell the good ones from the bad ones, and get to work on Truth #2.

2. Focus on Problems Worth Solving

In order to overcome prioritization challenges and to differentiate good ideas from bad ones, it’s critical that an organization identify a small number (1-3) of meaningful problems to solve and then deeply understand what would make for a good solution. The result will be a very well-articulated problem to solve, which provides criteria to assess ideas. This is key to separating the good ideas from the masses.

Many leaders have a strong idea of where their organizations need to go, but they struggle to get everyone else in the organization to “see” the vision—to understand it. Successful innovations are driven by clear visions: 1,000 songs in your pocket, a mop you don’t have to wring out, a patch you wear on your stomach that serves as an external pancreas. Being able to clearly and concisely articulate where you need to go is key to getting there faster than your competition.

4. Backcast Your Path to the Future

When challenged to navigate to a future state, it’s very helpful to have a map that leads you in the right direction. Future state maps are created through methodical backcasting from the future state. The resulting map not only helps you know exactly what to focus on this year, it provides direction for the years to come. Done well, the result will significantly increase your innovation trajectory.

Experience has taught us that innovation doesn’t come easy. It requires maverick characters within an organization to champion the vision and drive progress, often in the face of incredibly challenging hurdles. Steve Jobs and Elon Musk are household names because they are mavericks, and every billion-dollar innovation we’ve had a hand in, happened because of a maverick. We’re talking about people like Craig Wynett (Swiffer) and Claudia Kotchka (Pampers) from Procter & Gamble, John Garibotto from Insulet, and Paul Litchfield, our first billion-dollar maverick, with whom we partnered on the Reebok pump.

Working within these truths has enabled us to help clients consistently drive meaningful innovation into the world. In 2018, we dramatically increased our ability to help our clients build and scale those innovations when we joined forces and became part of EPAM. We are now able to help our clients define their future state, backcast a path to get there, and design, develop, and scale their future state technology platforms and business operations to compete in the connected economy. By working across business, technology, and operations departments, we’re able to help our clients become truly adaptive organizations.

Strategic adaptation, it turns out, means that the fastest way to the future starts with knowing where you’re going.