The Case for Slow Innovation
Continuum 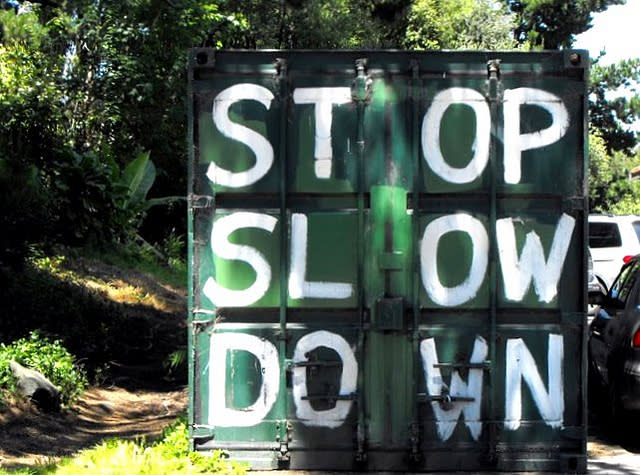 The architect Cedric Price once provocatively asked, “Technology is the answer, but what was the question?” Despite what General Electric says in their recently released “Innovation Barometer” (discussed in this article in Fortune), the question remains an important one when trying to understand the forces that drive companies’ “Fear of Becoming Obsolete.” While widespread, “FOBO” is more multifaceted and unique to each enterprise than simple binaries such as “old product lines” bumping up against the mysterious new “digital” way of doing things, or “safer,” “incremental” innovation winning support over more audacious approaches.

A lasting and effective solution to an individual company’s FOBO requires more than the infusion of “digital” into all aspects of the existing business.

A lasting and effective solution to an individual company’s FOBO requires more than the infusion of “digital” into all aspects of the existing business. Shifting the “Process” of most established companies, without the support of “People” and “Problem” — the remaining two “P’s” required to create, launch, and scale compelling new offers — would not go well. Process is often seen as the easiest to change of the trio. It’s also often the easiest to explain, at least compared to the other two P’s: the right People (organized in the right way, of course), and a clear understanding of the Problem one aims to solve.

Before proceeding, we must emphasize how impressed we are with GE’s successful leap into the 21st century. In tumultuous times, GE has beaten the odds, which according to Ray Wang, author of Disrupting Digital Business, are not encouraging: “Since 2000, 52 percent of the companies in the Fortune 500 have either gone bankrupt, been acquired, ceased to exist, or dropped out of the Fortune 500.” What worked in one context, at a given moment, for a given industry is not guaranteed to do so everywhere else and for all time.

Since 2000, 52 percent of the companies in the Fortune 500 have either gone bankrupt, been acquired, ceased to exist, or dropped out of the Fortune 500 - Ray Wang, Disrupting Digital Business

One sees multiple instances where the rapid infusion of technology into daily business practice is neither productive nor desirable. In healthcare, an industry with which Continuum often works, changing Process overnight is seldom an option. The trio of Mayo Clinic doctors who published Think Big, Start Small, Move Fast, reflecting on the impact of a redesigned chair for children having their blood drawn, noted that, “although it did transform a patient experience, it’s hardly a game changer — and really, that’s by design.” And here’s why: “Tearing down everything and starting over is not an option in health care.” The same holds true for producers of goods of which their handmade provenance is their distinguishing characteristic. Longtime fans of high-end leather goods, for example, would likely bristle at a new Coach or Filson bag that flaunts overtly “digital” design elements.

Tearing down everything and starting over is not an option in health care.

Just as the fear of obsolescence is unique to each company, so too are its potential causes. Companies face many more diverse challenges to reliably innovating beyond an inability to combine what GE calls its two “modes” of the “old” way and the “digital” way (though that may have been the perfect strategy for GE at the time). It’s natural for 81% of CEOs to “worry about being left behind as technology evolves faster than they can adapt,” but we argue that this fear may stem from how we talk about today’s technology—that generalized, daunting, and ambiguous concept that sucks up such considerable “airtime” in our business media. While a company’s reaction to the fear of obsolescence might lead them to install sensors in every one of their products to capture as much data as possible, a more nuanced reaction is in order.

Process is never the frictionless undertaking that its purveyors would have you believe. Yet technology-led and Process-driven solutions appear seductive in their certainty when compared to the challenges of seeking out genuine human Problems to solve, or understanding the complexity of the People with whom you work and aspire to serve. With a bit of calculation, change in Process can often be given a firm price tag, and a fixed expense is a tempting response to the pervasive ambiguity of FOBO. In contrast, it can be hard to summarize the complex challenges of People and Problem into the succinctness of a budget line item. Changing these two P’s requires a deeper look inside of one’s company, and the people who shape and define it.

Creating a plan that meaningfully changes how people work inside an organization to drive innovation will require more than studying its process charts and externally visible attributes. Just as a plan to build innovation capability is unique to each organization, it can only be drawn out through taking action—in this case, small, gradual, targeted actions rather than broad, overnight sweeping ones (the type that GE maligns as “safe innovation”). We believe meaningful changes come not through the creation of a grandiose new Innovation Center, a creative offsite, or a company-wide meeting—rather, it comes from performing the same daily projects as before, and reflecting upon them in a novel way as one performs them.

During a recent episode of the web series Comedians in Cars Getting Coffee, Jerry Seinfeld asked the venerable Steve Martin why he liked performing in front of people, and Martin answered by explaining how live performance was necessary to improve his craft. While performing, “…all of these moments sink into your head, and you’re going ‘I see a new way now how to structure this thing, so that it’s not this structure, it’s another structure!’…and you can only have seen it by seeing [the comedy routine] enacted. You can’t think it.” The same holds true for improving your organization’s ability to innovate. We’ve spoken with frustrated companies that tried, unsuccessfully, to shoehorn change into their cultures via top-down edicts that laid out radical new org structures, or who were disappointed after pinning their hopes upon the overnight, company-wide adoption of a much-hyped new technology. We’ve found that these strategic missteps in the pursuit of innovation actually prepared them for our very different approach. We developed their company’s innovation capability by strategically linking continuous, small changes in an organization’s everyday work to the end-goal of building a new model of work grounded in the continual testing and questioning of hypotheses. We believe progress is only enabled through forward, reflective momentum.

Instead of embarking upon a Process-led approach to innovation, it’s better to begin by reconsidering the pieces of a company already in play: the People. While “org changes” and reshufflings come at a high “people cost,” forcing new technology and other processes upon people can often cost a company far more. Although proponents of technology often try to thread its adoption and integration into the fabric of the organization as a seamless process, the results can vary significantly. We argue that instead, the building of an organization’s capability to innovate must begin with the People who know the organization’s Process inside and out. These employees must be empowered to march down paths that let them investigate new Problems to solve and develop what we call “minimum viable offers” or “MVOs.”

While the notion of a “minimum viable product” has recently gained traction in the business world, we’re accustomed to working with clients who also focus on delivering both service tangible products and intangible services. For example, to test a service for a client that required creating a call center, rather than invest in the space, recruiting, and training for a yet-unproven service, our “duct tape and baling wire” MVO consisted of taking three high-performers at the existing call center and setting them off in their own room. Thus, while the results of a given innovation should certainly be big and wide-reaching, the Process and pieces required to create it need not be. In fact, we recommend an approach that looks and feels less like a catapult and more like the lock system at the Panama Canal: “Pushing something conceptual into the machine that is an organization’s business-as-usual simply doesn’t work. You need to protect a new idea within a lock, making sure it’s well defined and proven effective enough to scale. Then you can gently move it into the ocean that is the day-to-day business.”

“Pushing something conceptual into the machine that is an organization’s business-as-usual simply doesn’t work. You need to protect a new idea within a lock, making sure it’s well defined and proven effective enough to scale. Then you can gently move it into the ocean that is the day-to-day business.”

When deciding how to remain resilient in the face of FOBO, consider the mantra of first responders and emergency room doctors: “Respond, don’t react.” At its best, data is what’s known in economics as a “lagging indicator,” a rearview-mirror glimpse of a previous reality. The pursuit of new Processes that let you glimpse this data may help you react to specific situations, but the development of your company’s innovation capability will help you respond to truly “disruptive” circumstances. While up-to-date information about your company’s operations is important, don’t lose sight of what that information should ultimately accomplish for you: continued relevance in a fast-changing marketplace. We don’t recommend an abandonment of Process altogether, but rather an adjustment of focus. Numbers are helpful in this endeavor, but a group of talented individuals within a company empowered to create, launch, and scale new offers—what Continuum calls an Implementation Pod—is more valuable than any contingency plan or data-supported picture of reality. Such an Implementation Pod enables adaptation to an ever-changing reality (rather than only a data-driven representation of it), and is built from the most powerful resources your company has: Your People. Finally, here’s the good news: they don’t require the purchase of any new technology.