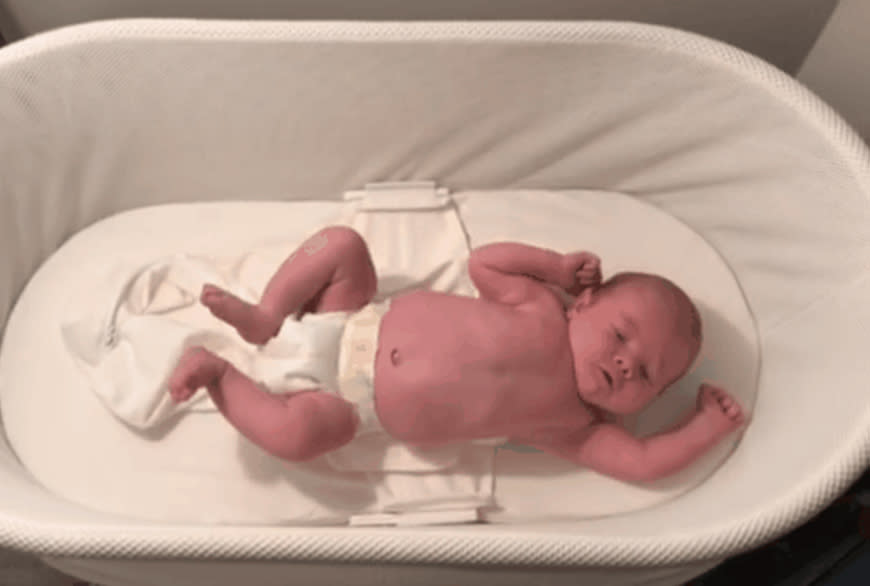 After 15 years engineering everything from well-known consumer products to some obscure, complex medical devices, I’m kicking off a completely new sort of project. I just—just—became parent to a person some call, ahem, the Cutest Baby in the Whole World. And while Old Me has always had an experienced mechanical engineer’s perspective on the products I bring out into the world, New Dad Me has some other needs to address.

These needs are embedded in, of all things, baby products! From what I can tell by the design of this stuff, this New Dad Me is motivated by three factors: terror, sleep, and convenience. But mostly terror.

Before we have to worry about padding the walls and protecting my LEGOs, I must ensure the little guy keeps continuously breathing. SIDS scares the hell out of me. Which is why I’ve invested in a well-established ecosystem of putting-the-baby-down-to-sleep techniques, bassinets emblazoned with industrial-safety warning signs next to pictures of doggies, and countless velcro-and-fabric stretchy garments designed to bind our baby into a contented, safe little burrito.

However, even with all these SIDS-prevention steps, I still needed more assurance and more functionality. So I rushed to connect our newborn to the internet—with connected devices that take care of him in ways beyond my abilities, I mean. Cat memes can wait until he's a little older.

Since my wife and I can't actually hover over him watching his chest rise and fall all night, we bought him an Owlet Smart Sock with a pulse oximeter. This item, in case you don’t know it, continually pings a base station with his heart rate and oxygen level. When something bad happens, we leap out of bed terrified, and then immediately thank the Owlet God, and any other available deity, for the false alarm.

While the Owlet Smart Sock isn’t an FDA-regulated device, its functionality shows me that the designers think the way EPAM Continuum does when we work on medical devices. I appreciate that the onslaught of phone notifications isn’t the Owlet Sock’s primary interface. The green pulsing ring of light on the base station means it's talking to the sock, and that there's a high-reliability connection. That’s where the alarm is located.

Our little guy is also grateful for the thoughtful soft-goods-and-elastomer design of the Smart Sock, which holds the sensor in the correct location without squeezing or chafing his little feet. While it’s not obvious why it requires two apps (and a monthly fee), both are responsive, well-designed, and present information clearly.

The other half of our effort to keep our critter well cared for while we get enough rest to stay upright is where he sleeps. The SNOO Smart Sleeper is a so-called smart bassinet that systematizes a lot of what we naturally do to keep him happy and safe.

I got pretty good at swaddling the little dude either the old-fashioned way, or with elaborate velcro contraptions, but both of these were easy for him to fight. In SNOOville though, the tying of the garment to the bed accomplishes several things: it ensures the baby can't roll over if he tried, it passes off a lot of the ‘structure’ of the swaddle to the bed and essentially becomes an elastic band around his arms, and it allows the bassinet to sense his presence with the ski-binding-like clips. Better yet, this simplicity allows us to strap him in too fast for him to wriggle out of. For now.

Question is: Once strapped in, do all the motors, bearings, and sensors work as advertised? (My much better half has thus far forbidden me to take it apart, so this question will remain for some time!) While the kid’s voracious appetite still means that he's thinking about food every three hours sharp during the day, after switching to the SNOO, our little formula re-processor's slept for longer than four hours, and the effect is felt at both ends of his sleep periods. When he stirs and fusses and threatens to wake up cranky, it reacts by temporarily increasing the motion and adjusting the white noise; while he looks a little bit ridiculous on the baby monitor, the oscillating motion and vibration are very smooth, and impressively rattle-free. When we go to put him down, no longer is it the meticulous process of coaxing him through the stages of sleepy, sleepier, sleeping, awake! iteratively—adorably mostly asleep will suffice. For now.

These products aren't perfect, mind you. The Owlet sensor almost implicitly assumes you have a nursery, in that carrying the little guy across my tiny apartment to the edge of Bluetooth range for 3 a.m. bottles and diapers can set off its lost-contact alarm (it's ruined “Hush little baby...” for us). When we get to baby-proofing, we'll have to move it somewhere its inelegant micro-USB power and charging cables are out of reach. It might also be nice if the sock had a switch to allow it to not be running all the time when not charging.

A downside of the otherwise excellent SNOO swaddle is that it makes it hard to see the little guy's chest rise and fall (there's no breaking that habit). Amusingly, when the vibration of the bassinet kicks into high gear, the Owlet sock reads that as ‘wiggling,’ but fortunately he's almost certainly making noise in that temporary state anyway. Finally, the system overall is so expensive and its window for use so short that one wonders if a pared-down version, or even a subscription model could have been considered.

A question common to both these devices is that of privacy, but while I normally am stingy with any data I hand over, I blithely clicked through the agreements here. This says a lot about how I perceive the value of the service.

As someone who works on products like these, it's true I might have made other design choices, but none of these quibbles make us think about doing without them. In the end, it's the appropriately focused feature set of the devices, and their natural building-upon of things we already do, that make them fit so well into our lives. We were already swaddling him and rocking him to sleep, but now we do it better. We still listen for his little snores and sometimes still get up to watch him breathe, but having that alarm as a backstop makes it more comforting than terrifying. For all the well-executed details, clever bits of plastic and neatly implemented hidden sensors, it's the design of their use and the ability of the designed stuff to disappear that is truly valuable.

And with that little bit of extra sleep, and a lot of coffee, I can get back to the engineering. For now.