I Hacked Glucose Monitoring… and Lived to Tell the Tale
Continuum 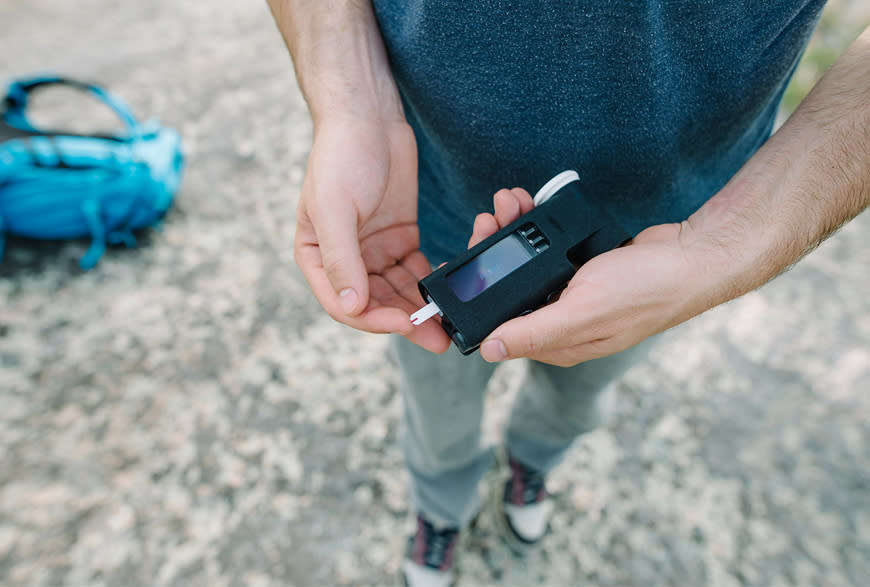 I am a human-centered designer. I'm also a person living with a life-long chronic condition. Diabetes. Because of this combination, I possess a particularly critical eye for the way medical devices work, well and poorly, in everyday life.
Now, many devices used for chronic conditions have advanced tremendously over the years. But this same tech looks far less amazing when you consider its awkward intrusions into the lives of the people who depend on it. The gym, the car, the pool, sex, weddings, concerts, darkness-these routine situations are often unaddressed when design solutions narrow their focus to mere treatment. For patients with chronic conditions these are not only medical devices, they are also life devices and they ride along with us, 24/7.

The medical device industry is often frustrating for patients such as myself. We're excited for innovation, but often have to wait for meaningful change. Still, recent trends-hacking, aftermarket modification, and end-user customization-have shuffled long-established relationships between device producers and consumers, and opened opportunities for new and accelerated methods of user-centered innovation.

I've made myself a test case for user-led innovation in the design of life devices.

I've made myself a test case for user-led innovation in the design of life devices. Read on, and together we'll uncover some of the exciting technologies, undeniable limitations, and creative possibilities available for patient-led innovation today.

Innovating Diabetes from the Bottom Up

Treating diabetes is problematic. Yes, technological advances have improved the diabetes experience, but a number of seemingly simple human issues have remained difficult to solve.

One example: the standard glucose test. This essential procedure gives an in-the-moment understanding of sugar concentration in the blood and serves as the foundation for corrections in food, exercise, and insulin. It is an everyday intervention for the approximately 30 million diabetics in the United States. Some technical innovations, such as conventional continuous glucose monitoring still rely on this decades-old procedure multiple times a day for calibration, and though there are some new developments happening here, it'll likely be with us a while. The difficulty of this process impacts many: If all people with Type 2 diabetes were to test three times a day, and people with Type 1 eight times (like I do), there would be roughly 85 million glucose tests daily in the U.S. alone, making a smart redesign of the process incredibly impactful.

The annoying truth is that a number of simple yet crucial human considerations have consistently escaped device makers' attentions. For instance:

Aesthetics. Aesthetics are immensely important in patient-operated medical equipment because they deeply impact proper use. For Type 1, aesthetics play an important role in socialization, de-stigmatization, and encouraging proper testing frequency. If you're unhappy with your testing equipment-especially in teenage years-you be less likely to schlepp it around and use it.

The annoying truth is that a number of simple yet crucial human considerations have consistently escaped device makers' attentions.

Ergonomics. Diabetic glucose testing normally involves the individual removal and operation of three components: the testing meter, the lancing device, and the disposable strip canister. After use, each component is typically returned to an elastic or plastic attachment within a zippered case. While the technology is effective at measurement-the ergonomic gymnastics required are complex and difficult when performed with shaky hands from a low blood sugar. To add to the procedural chunkiness: supporting the equipment while lancing a finger, drawing blood, and applying a sample is next to impossible without putting things down. This means finding a support is an additional part in the equation. Especially for Type 1 athletes, stopping, locating a stable horizontal surface, and operating a series of components in a trial or race is detrimental to success and ultimately feeds stigma. Is there some way we could improve the experience of the 85 million tests happening daily? From a time perspective alone, a reduction of just 30 seconds (from a one-minute test) could save a collective lifetime (80 years) of wasted time in the U.S. each day.

Realizing that many current diabetes products face aesthetic and ergonomic challenges, I decided to test these hypotheses through physical prototyping, iteration, and use in the real world. What follows is a step-by-step breakdown of my exploration in bottom-up design.

I had a hunch that the complexity and the high number of parts in a typical diabetic testing system were low-hanging fruit in the search for a smoother experience. If each testing component could become a function of a single larger part, it seemed possible to reduce overall bulk, make something slick, and allow for improved ease of use. First: Device selection. There are many brands of glucose tester on the market, so I began with LifeScan's OneTouch's UltraMini meter and the OneTouch Delica lancing device-at the time both popular and compact. These subjects changed in later prototypes, to prove concept applicability across platforms.

Second: Teardown and digitization. I needed to understand the geometry of the meter, lancer, and canister. I 3D scanned the three pieces of equipment, producing digital versions, to form the basis for 3D modeling.

Third: 3D modeling and iteration. Starting from the base 3D scans, I did initial designs in Rhinoceros 3D with the goal of moving to real-world testing as quickly as possible.

Fourth: 3D imaging and rendering. While this project had clear functional demands, I was also concerned about aesthetics. How to make this clunky equipment attractive? How to reduce the size? Early on, I worked through many of these concerns with digital imaging and rendering, which also proved useful when talking about the project to stakeholders before more significant time investment.

Fifth: Prototyping. Realizing that usability testing was essential to understanding the procedural opportunities, my ultimate goal was the production of functional prototypes. These prototypes were fundamental to the core design and had to happen quickly and frequently to avoid becoming "precious." This is where 3D printing became really helpful. Often ideas that looked great on paper ended up being utterly terrible in physical reality.

In the end, three families of prototype emerged:

The first physical prototypes were white ABS FDM prints. These assumed a left-hand support and placed the lancer in a position so that the right hand could remove a strip and apply a sample without putting the case down. Housings enclosing the strip canisters slid to lock the case together. The good: It allowed one-handed testing! This radically increased the options for how and when to test and validated a number of my initial assumptions. It also fit the equipment well, meaning my scans were working, and the ABS material slid snugly into a pocket. The bad: The sliding canister detail was too complex and had too many fit and finish problems. While the prototype reduced overall volume, when compared to a standard nylon kit, it had a large silhouette. I was convinced I could reduce the form factor and material volume. In short: It felt too complicated.

To address the complexity challenges with the first prototype, I wondered if a single-part rubbery housing was possible. I also started to question the limitations of 3D printing. I began printing molds and casting with liquid silicone, rather than the final parts, iterating my way through split-line location and mating details until successful casts began to take shape. I also adapted the design to fit the Contour's Next Link meter, which pairs with MiniMed's popular insulin pumps. The good: The insertion issues were solved, and the silicone fit the equipment well. The bad: The material was heavy and the silicone's tacky-ness made it extremely difficult to put into a pocket. Fun process, but a deal breaker. Back to the drawing board.

Taking these observations into consideration I decided to try Selective Laser Sintering (SLS) nylon-with the hope of allowing thinner wall thickness with some flexibility. I designed these to fit Contour's newest Link meter, a form factor that greatly reduced the size of the required enclosure. Following a lot of tweaks and testing, I got to a stable functional prototype that could be counted to work hot off the printing bed. For my purposes-a proof-of-concept limited run-this seemed like success. The components slid in and out of the print with ease, they could be used easily by a single hand, the form required a minimum amount of material, and the prototype slipped into a pocket, purse, or bag.

While my concerns clearly focused on simple ergonomic issues, you can imagine the same innovations from the viewpoint of a patient-engineer with expertise in miniaturization, or a patient-programmer interested in cloud computing.

In the end, the final prototype reduced the required hand motions from ten to six, eliminated the need to put the kit down for testing (making testing in the dark, in bed, in the car, at the gym possible), and brought the three essential pieces of equipment together in a perfectly portable housing. While this project targeted fairly simple, non-technical opportunities, it greatly increased the freedom and flexibility of my personal management routine-which improved the experience of living with diabetes and the satisfaction I felt with the original equipment.

Innovations like these are increasingly happening in the medical space from the bottom up.

Importantly, this project relied heavily on the power of design through testing and real-world iteration. Design aspects that seemed obvious at the end of the process could not have been generated without the opportunity for failure, redesign, and evolution. Had the project stayed at the imaging/digital phase, 90 percent of the innovation that occurred in testing would have remained uncovered. Getting things out into the environment where their impact is truly tested is absolutely essential.

Enough About Me. Let's Get You Hacking

3D printing. Rapid prototyping. Social media. Powerful modeling software. These enabling technologies allow people such as myself to engage, collaborate, and innovate at a level that is new, exciting, and impactful. The functionality achieved by the SLS prototyping, for instance, proved that popular tools have advanced to the point that even I could contribute meaningful features to a highly engineered corporate medical product.

While my concerns clearly focused on simple ergonomic issues, you can imagine the same innovations from the viewpoint of a patient-engineer with expertise in miniaturization, or a patient-programmer interested in cloud computing.

Innovations like these are increasingly happening in the medical space from the bottom up. As I see it, a number of clear challenges must be leapt over if we're to leverage the potential of patient-led innovation. First, the education and democratization of tools that can enable widespread grass-roots innovation. Second, faster and more open methods of regulation and standardization that can accept the fast-paced, bottom-up nature of technical development today. Finally, we need corporate organizations that encourage, incentivize, and are nimble enough to recirculate innovation driven from the bottom up at a mass scale.

We also need some adventurous individuals to participate. Have you yourself done some hacking? Interested in giving it a go? Send me a note, and let's talk.