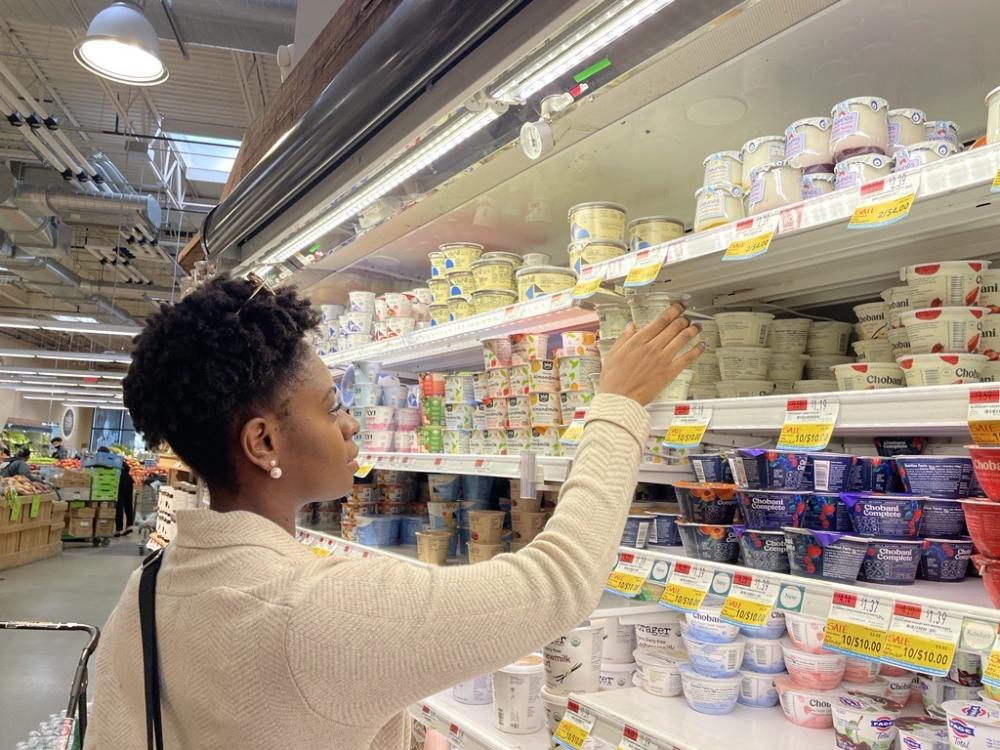 Sustainability. It’s a trendy buzzword currently flying around in business circles, but what exactly does it mean for our organizations, our consumers, and our planet? To answer this complicated question, we conducted ethnographic interviews and an anonymous survey with our global EPAM community. We wanted to understand what matters most to them when shopping for packaged foods, so we zeroed in on one food in particular: yogurt.

Meet Steven and His Family

We’re going to look at our research through the lens of someone we’ll call “Steven” and his family. Steven is a composite of the people we interviewed, highlighting their key behaviors, needs, desires, and pains when buying, eating, and disposing of yogurt. He lives with his wife, "Lisa," and their two young children. Steven is interested in sustainability, and he and his wife are highly involved in sustainability efforts, particularly in their city. Here’s what we can say about the family and their love for yogurt: They think yogurt is tasty, healthy, versatile, and convenient… until things get messy. Its packaging generates excessive waste, and Steven is not always sure how to properly discard the waste. And for Lisa, sustainability goes beyond the package; it’s just as important to know how the yogurt itself is produced, from farm to factory to the people involved. Let’s dig a little deeper into what these aspects mean and what we can do to address Steven and Lisa’s needs and concerns.

When we asked respondents what mattered to them most when buying yogurt, taste and health were the evident winners, with 40% of people ranking taste as their first choice while 26% ranked health as their first choice (see fig. 1). Yogurt is versatile: 33% of people eat it straight from the container while others have several uses for yogurt, whether as a sauce or dip, in a smoothie, as a general cooking ingredient, or for dessert (see fig. 2). 71% of our respondents often consume it for breakfast or as a snack (see fig 3)—and why not? It’s a quick and simple grab-and-go treat that can also serve as a meal.

When it comes to yogurt, Steven feels good knowing his kids are eating something delicious and nutritious, plus he and his wife can indulge in a sweet or savory treat that is a better choice than a cookie.

As advantageous as yogurt is, Steven prefers not to give it to his kids on-the-go or in unsupervised situations because things could get messy quickly. Even when he enjoys a cup for himself, rinsing it out to recycle it can feel gross. And if a recycling bin isn’t nearby, he ends up carrying around wet, smelly trash.

Steven eventually found a quick fix for the mess, but it came with a caveat—single-use waste in the form of unrecyclable tubes. He continues to try to find the right product that satisfies his taste, health, and convenience needs, while also having minimal waste. Ultimately, he’s found himself prioritizing the value of the yogurt itself overall. When he buys yogurt, he buys yogurt—not the package, not the brand, and certainly not the environmental impact.

Create a win-win situation for him and the planet and reimagine the product experience. Even though yogurt is typically served as semi-liquid food in a plastic or sometimes glass container, this doesn’t effectively address all of Steven’s needs. He wants something that creates less mess and less waste without compromising taste, convenience, and health benefits. We want to explore how to challenge the traditional form of the product—and its package design—to make it appealing to Steven when he is perusing the grocery aisle. For instance, we found that 20% of people would be amenable to eating the package itself and 20% would be open to repurposing it (see fig. 4).

When we asked people how they defined sustainability, many responses had to do with packaging and its recyclability. And indeed, a resounding 79% of them answered that it is at least somewhat important that their packaged food goods are zero- to low-waste (see fig. 5). Interestingly, the environmental footprint is more often the last thing people think about (fig. 1) when buying yogurt. In our findings, it isn’t the first or second most important factor.

We also learned from our interviews that people only really think about the environmental footprint of their yogurt when they have to get rid of the container. And how do people prefer to dispose of these containers? For 46% of them, the first and second choice is to recycle. They are also open to repurposing, composting, and returning them to the store for a refill (fig. 4). Essentially, people prefer to do what they are already familiar with, and they are willing to try something new as long as it fits in with their current habits and lifestyle. Mailing something back is just too much trouble, and with a few exceptions, burning the package is not an option (fig. 4).

As we previously saw, Steven has various priorities when he goes to buy yogurt. But when it’s time to dispose of the packaging, he’s confronted with a bit of a plight. He only interacts with it for a minute or so, but it can take a substantially longer time for yogurt cups made of type five polypropylene to decompose in a landfill. He’s not clear on how to recycle it properly, and besides that, he’s skeptical about the difference recycling even makes. He considers reusing his large yogurt tubs but feels it is unsafe and unclean to repurpose them, compared to other materials like glass. At some point, Lisa suggests that he buy yogurt in glass containers so they can reuse them around the house; eventually, they accumulate too many glasses. He is open to returning the packaging to the grocery store (like he returns his soda cans and bottles) as long as he doesn’t have to refill it himself.

Make it clear about what he can do with his packaged food after he has finished. If it’s recyclable, how should it properly be recycled? Does it need to be deconstructed? Is it biodegradable or compostable? Whatever it is, we know that there is an obvious and compelling desire consumers have to do their part for the environment, but it’s not always clear just what this part is. Considering that 46% of people want a clear and simple way to recycle their yogurt packages, explicit guidance along the way would be immensely valuable. It might also be relevant to rethink the usual means of the cradle-to-grave process. We can potentially design a circular service model that makes it easy for Steven to return his packages in a way that feels familiar and that can be adapted seamlessly into his current lifestyle.

Insight: Beyond the Package

In our research, people generally defined sustainability as a system that extends far beyond the package. Some of our respondents said:

“I would be a sucker for adding yogurt to a farm share if they showed me the cow.”

“For me, humanity and humane treatment of animals definitely ranks higher [than sustainable packaging].”

Sustainability involves the impact on people and the earth, and the transparency of this system is becoming more important to consumers. Are the cows humanely treated? Are the products locally sourced? What’s the environmental impact of production and disposal? What is being done to address these questions if the answers are fuzzy?

Steven is well aware that his family’s yogurt consumption generates a lot of plastic, so he and Lisa find other ways to live sustainably. He is staunchly loyal to food brands other than yogurt that stand for humanity and social responsibility and communicate clearly about how they plan to reduce their environmental impact. He and Lisa also shop locally and are incredibly involved in their community’s environmental initiatives.

We must give Steven and Lisa transparency, accountability, and follow-through. While 79% of people want low- to zero-waste packaged foods, we see that consumers are evolving to become more like Steven and Lisa, who want low impact on people and the planet. Let's ask: What can we do to be transparent about the food process from inception to end of life? How might we give Steven confidence that when he does his part, he’s making a difference for the planet? Would we need to implement tools to be able to monitor and report our environmental impact? And to take things further, how could we restructure end-to-end production to create a more sustainable process for people, the planet, and for the bottom line?

The Future of Sustainable Yogurt

There are a lot of moving parts to consider as we try to edge toward a more sustainable future. What we can learn from Steven and his family is that there are incredible opportunities to explore that will benefit consumers, our organizations, and ultimately, the planet.

The team that collaborated on this report is Buck Sleeper, Nicole Nassif, Adam Afzali, and Clara Asumadu, with the help of Megan Welker.

For this report, we surveyed 179 respondents across the globe using Qualtrics, with the majority of people being from the United States and different parts of Europe. The survey focused on people who ate yogurt, bought yogurt, or didn’t buy or eat yogurt at all. Some stats not mentioned include:

Even though 90% of people ate yogurt or were in a household of people who ate yogurt, 97% of respondents bought yogurt for their household.

About 47% of people would pay 10% more for what they define as sustainable yogurt, and 22% would rather pay the same price.