Ten Organs on a Chip. Three Stories About the Future of Medicine.
Continuum 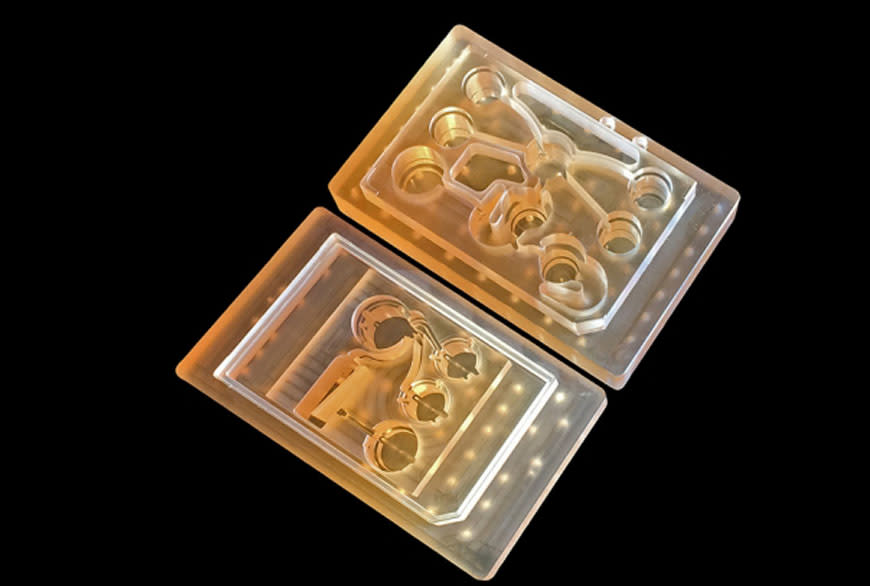 Last week, Linda Griffith’s team at MIT revealed that they’ve developed a platform that enables 10 tissue-engineered organ structures to live in interaction for a month, via a computer-controlled circulatory system. The end result: a model that can mimic the passage of drugs through the human body better and longer than individual cell types in static culture—and with more relevance than animal models. Which means? In the future, pharma companies can better understand drugs in the pre-clinical development stage, and progress more quickly and confidently to clinical trials where safety and efficacy in humans can be demonstrated.

When DARPA envisioned funding this effort, it sought a modular system that would enable serial or parallel interactions and would cost less, and be more reliable than, other micro-perfusion systems. Researchers would be able to start with a solid understanding of single organs, and then build up to diads and triads, through tech transfer with other groups. The resulting platform design focuses on keeping the hardware as open source and accessible as possible, so bio-engineering experts can construct a library of available cell-differentiation techniques, media formulations, scaffold designs, and the resulting microphysiological systems. As this library grows, research teams can build up higher-order systems when the cost and complexity of such experiments is justified.

Note: I’m not going to speak about the vast amount of labor that goes into designing and executing a successful protocol, selecting materials that are compatible with cell and drug chemistry, and analyzing and interpreting the data. While there are many smart and talented people working on each of these aspects, it’ll be a long time before your neighborhood CVS is running a 10-organ model of your body behind the pharmacy counter to test against your prescriptions. But let’s not let that stop us looking past the fog of the present to see what the future of this technology may hold for medicine.

The Future of Medicine Is Personal

In the 15 years since the Human Genome Project concluded, we’ve realized that differences in genetics do not fully account for differences in disease expressions and treatment efficacies. The environment in which that genome operates in seems to matter very much. As a result, there’s a lot of interest in the microbiome within the gut, which can contain as many bacterial cells as there are human cells in the entire body. These cells can introduce molecules into the bloodstream that can interact with cells all over the body and change the expressions of our genome within those cells. This is why NIH established the Human Microbiome Project in 2007 and last year researchers found that intestinal bacteria can accelerate the development of Alzheimer’s disease.

What does this mean for pharma?

Unless they tailor delivery with custom formulations or drug device combinations, their multi-billion dollar bets in drugs will show efficacy in a smaller percentage and harm in a larger percentage of the population than they had hoped. Tier 1 suppliers like Millipore have seen this trend coming and launched products like disposable Chromabolt chromatography columns to support drug production in smaller batches without risking cross contamination. These and other small-batch techniques have been adopted by clinicians seeking to deliver tailored cell therapies unique to individual cancer patients. In the scenario where the specific genotype and phenotype of a group of patients are important, the MIT platform makes a compelling tool for the future. If adult stem cells, immune cells, and the microbiome can economically be harvested, differentiated, structured, and interacted on a chip, physicians will have in-vitro models of a specific individual to test before administering trial or therapeutic doses of medications to people. On the way to that distant future, people with rare diseases will get better treatment and their physicians a better understanding of why specific treatments succeed or fail. In the broader sphere of consumer safety, organ chips can offer a way to compare the relative impact of pollutants, food ingredients, and over-the-counter medicines and supplements on human cells.

The Future of Medicine Will Be Massively Parallel

Microfluidic chips and layouts are already borrowing from the playbook of computer hardware development. Inevitably, the library of engineered components, materials, fabrication processes, and systems that make these chips possible will follow suit. They will become smaller, more efficient, and less expensive. No one has yet coined the micro-perfused tissue-engineered analog of computing’s Moore’s law, but there’s no denying that the number of experiments that can be carried out at once will go up and the cost of those experiments is already plunging. Rapidly. Leading the way are companies like CN Bio, with multi-lane liver or multi-organ chips that fit within a standard incubator; Emulate, with instruments that process multiple mono-layer chips at once; and Ginko Bioworks, which is automating organism engineering. Tier 1 suppliers of fluid management valves, pumps, disposables, and automation are reducing fluid-handling volumes, increasing speeds, and miniaturizing sensors to keep up. These companies are developing research and commercially focused solutions and talent pools that will eventually turn their attention toward the FDA-regulated sphere of medicine as well.

As in computing, increasing the number of bio-engineering experiments that can be completed within a given timeframe and cost will drive wider exploration, deeper confidence, and higher quality. For the paper they published, MIT ran eight platforms with 10 organs each with support from dozens of technicians and collaborators. For the ability of your clinician to test multiple treatment options for the cells of your body, we may need a cost and complexity reduction similar to that from Univac to the earliest personal computers. That took about 24 years, but technology moves faster today and the benefits to medicine will come sooner than that. Part of this acceleration will be thanks to the 3D printing industry, which has seen breakthroughs in chemically compatible and biologically based materials, higher resolution, and higher speed. All of which points to a future in which fabricating organ chips and the multitude of material and geometry variations necessary to support micro-physiological systems will be less constrained.

The Future of Medicine Is Interdisciplinary

To make the MIT experiment a success, research scientists, microbiologists, chemists, mechanical engineers, electrical engineers, software engineers, data scientists, and leaders of business and finance all had to work together. It didn’t just take collaboration, it took deep and sometimes difficult conversations about balancing future aspirations and ideals with the desire to deliver something real and now. These conversations can take time and resources that would be exhausting in a typical business environment. The success of this experiment in an academic environment is a real testament to Linda Griffith’s commitment. She was willing to let friendly strangers not only play in the sandbox, but she shared her buckets and shovels. The next phase of growing the capacity of organ-chips to change the future of medicine will require similar levels of playground politics. How will all the data that’s generated in these systems across multiple organizations get captured, validated, normalized, and analyzed to help drive everyone’s understanding? Where will the next set of interesting clinical questions come from? How will payers, caregivers, and pharma assess the cost vs benefit of funding the answers to these questions? Perhaps, as Sandra Hwang and Mike Dunkley suggest, the future of medicine is dependent on a healthy dose of humility and trust that result in strategic and productive partnerships.

What's next for organ chips in general, and MIT’s embodiment, is not entirely clear. The costs may outweigh the rewards for some time to come. What seems reasonable is that early adopters are exploring the business value they can offer today, and industry leaders are partnering to find, curate, and fund the applications that will keep stakeholders deeply engaged—at least for the foreseeable future.