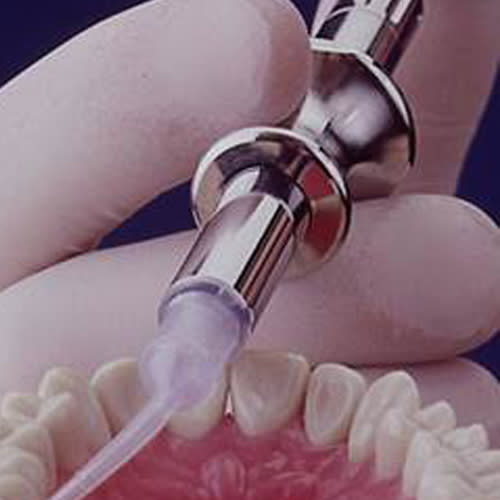 A few years back, I was hanging out with my teammates after an intramural soccer game. Relaxing after a hard-fought match, we learned a bit more about each other before jogging back to our busy lives. I knew my buddy Sam was a dentist off the field—his patients call him Dr. Gelso—but never got around to asking him: “Any chance you’ve used a periodontal tool I worked on almost 20 years ago?” Not your normal post-match chat. But something that day prompted me to ask. Thinking that the product had come and gone, I was blown away to hear that he and his staff routinely used it. Sensing my genuine surprise, he invited me to visit his office.

Three years later—a designer’s life is tireless!—I took Sam up on his offer and booked an appointment.

The product in question is a gum disease treatment system consisting of an antibiotic called minocycline HCI. (Brand name: ARESTIN.) This antibiotic effectively fights periodontal disease as long as the drug, in the form of microspheres, is placed accurately in the periodontal pocket(s) around a tooth, or a set of teeth, where bad bacteria has found a home.

As Sam gave me the full office tour, I was happy to hear that the product is still in use—but what caught me off guard is that the design is exactly the same as we specified back in 1997. That rarely happens. Medical products typically go through revisions every few years, due to cost reductions, material changes, safety concerns, or a competitive threat.

I was happy to hear that the product is still in use—but what caught me off guard is that the design is exactly the same as we specified back in 1997.

Another unusual element: seemingly no one had a bad word to say about ARESTIN. “I have absolutely no complaints about this [drug] which is very unusual for me,” says Sam.

What happened? Why had this thing lasted? I tried to locate an answer by casting my mind back to 1997, when Continuum began working with OraPharma, Inc. Back then, OraPharma was a young company committed to products that help improve and maintain oral health. Convinced that minocycline, in the form of microspheres, could produce significant improvement in battling gum disease, they asked us to find a way to deliver the drug in an easy-to-use, ergonomic delivery system.

As I watched Sam’s staff at work, I remembered how we relentlessly observed and analyzed how dental professionals clean and scale. With a holistic view of the users and their process, we generated a range of concepts that built on what we learned. We then shared the ideas with practitioners for their candid feedback (it was the opposite of pulling teeth). Through several design iterations we came up with the disposable tip, support tray, and the re-usable delivery handle just as they appear today. Our design objective was to create something that was intuitive. The star of the show, of course, was the antibiotic. The delivery system simply had to work day-in and day-out and not get in the practitioner’s way.

I recall that we favored a pen-like concept. It provided tons of control to anyone who tried it on our simulator. Convinced that the concept would do well, we tested it with a group of dentists at a periodontal conference. The pen, well, failed. Although the dentists appreciated the pen’s potential level of control, they were more comfortable with a syringe-like delivery. Injecting local anesthesia with a needle and syringe is common practice in dentistry, but not during routine cleanings—where most people find out if they have early signs of gum disease and where the use of ARESTIN can be quite effective.

Key design features of the final system include a set of 12 single-dose, angled tips that are optimized for good access to all potential sites within the mouth. The disposable tip aligns to the handle and snaps in place, then locks until the user is ready to release it for the next tip. The one–size-fits-all handle is balanced in the hand, and the thumb ring allows for tip rotation relative to the fixed thumb position, giving the user a high degree of flexibility and control. There are three small “flats” on the cylindrical grip to prevent the handle from rolling off the work surface. Finally, the stainless steel handle can be easily opened without tools to assure thorough sterilization.

As the tour progressed, I asked Sam how the handle performed during a typical treatment with ARESTIN. “It never fails to work,” he said. “I just line it up, it dispenses very smoothly, and I pop it out when I’m done; it’s great.”

I wanted to know if Sam had any issues with it.

“Unfortunately, insurance typically doesn’t cover the cost of the doses,” he said. “They are expensive and they can add up if there are a lot of pockets to treat.”

Sam also described an interesting workaround to improve access between the gum and the tooth. He will take a hemostat—that’s medical pliers to you and me—and gently compress the tip before he places the tip into the periodontal pocket.

With advances in technology coming faster and faster and fashion trends changing with the seasons, consumer products have such a short shelf life today. Medical devices typically have a longer lifespan because of long and regulated development cycles. Still, it’s kind of cool to find a product design that remains on the field for so many years.

As the tour wrapped up, I felt like I’d scored a designer’s hat trick. Our work (a) helped a small business grow into an established company; (b) has been a pleasure to use by dentists and hygienists; and (c) continues to be an effective treatment for a common periodontal disease. If only all design projects were as simple as ABC…

Is there a product that you admire that has been on the market for more than a decade that has gone unchanged? If so, I’d like to build a list and study the reasons why. Please send an email, to marketing at continuuminnovation dot com, detailing your product(s) and the reasons why you think the design has not changed.