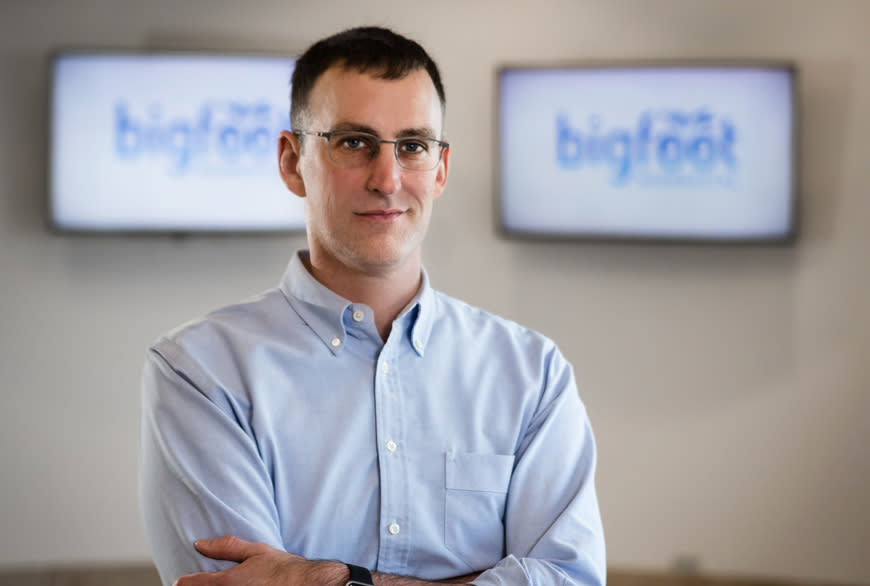 This post was produced in conjunction with the American Diabetes Association.

Jeffrey Brewer is on the phone—and on the move. It soon becomes clear that the President and CEO of Bigfoot Biomedical won’t stop moving until everyone who requires insulin can access Bigfoot’s solution, and their lives are made easier as a result. “People are living very compromised lives. They and their families are expending a lot of mental and emotional energy. The tools don’t exist to make it easy and safe.”

Bigfoot was born out of personal experience—Jeffrey’s son has Type 1 diabetes—and there are no current solutions for managing insulin delivery: just technology pieces. The Bigfoot mission, then, is not just a cutely crafted statement hanging on the office wall, it’s critical to the company’s success, and Brewer refers to it frequently in our conversation. Turns out, innovating in diabetes is hard. Raising capital to innovate in diabetes is hard. The Bigfoot mission is personal, and it provides Brewer with the fuel to keep going.

Brewer is also a businessman. He has seen many diabetes-focused start-ups try and fail because they weren’t ambitious enough. Many attempt to solve just one part of the insulin management problem. He cites Asante as an example. “[They] did a really cool thing in simplifying the insulin loading process… but it didn’t solve any other commercial problems, so it was still complicated to prescribe from the doctor’s standpoint of onboarding and configuration. It only added cost from the standpoint of the payer.” The lesson? “You’ve got to think bigger, and you’ve got to solve more problems if you’re going to create a valuable business.”

We cover a lot of ground during our conversation. The challenges of building an ambitious business are many and varied. Brewer’s message is more than a well-honed investor pitch; the key headlines are there, but so are the nuances, those insights that only come if you’re close to the challenges you seek to solve, close to the day-to-day development efforts, and close to your team. Three key takeaways:

“The vast majority [of diabetes patients] are treated by PCPs and not by endocrinologists. The current treatment, the state-of-the-art, doesn’t scale in the healthcare environment that we have.”

Bigfoot is designing the experience for patients, for providers, and for payers. The solution needs to be comprehensive, and it needs to address all three of these constituencies at the same time to be successful.

Bigfoot is betting its future on a new business model. If Bigfoot can’t save payers money by reducing patient hospitalizations, it will fail. Incumbents can’t afford to expose themselves to such risk. Enter Bigfoot.

Bigfoot is focused on execution. Execution, not technology, not regulatory, not business model, is its biggest risk. And because capital in diabetes is hard to raise, and much of the technology exists already, Bigfoot is partnering where it can, and only developing new stuff where it is really needed.

People living with diabetes who dose insulin can struggle to control their glucose. “[Insulin] is a dangerous drug. The tools that are required to deliver it are complicated. [They] require a lot of training, a lot of discipline, a lot of work.” More than this: “They are only effectively used by the best patients, with the best insurance, and the best doctors, and that’s just not your average person.” For patients, ease-of-use is paramount, but the right solution must also manage disposables inventory and require one scrip and one copay. “They don’t want to spend more time on their disease, they want to spend less,” Brewer says. The average patient “doesn’t read manuals, doesn’t listen to their doctor, doesn’t follow instructions.” He wants to make “easier to use” part of the label. In turn, most physicians treating diabetes are not specialists. “The doctors don’t have a lot of understanding of the disease, and they have even less understanding of the tools. They don’t have the training, the time, and the resources to support complex devices.” Says Brewer: “The vast majority [of patients] are treated by PCPs and not by endocrinologists. The current treatment, the state-of-the-art, doesn’t scale in the healthcare environment that we have.” Brewer notes that “for the doctor… we’re going to shrink down and make more economic the footprint of the therapy on that clinic and their practice.”

Finally, payers don’t believe existing tools will deliver an economic outcome. Addressing the needs of payers is about identifying the right business model, one that’s based on what payers care about, one that can be measured, and one that delivers returns over the short-term.

The economic cost of diabetes is enormous, and extends far beyond the cost of the insulin-dosing therapy itself. Insulin dosing errors routinely lead to hospitalization. Long-term costs arise due to microvascular and macrovascular complications. “The payers? They are focused on short-term outcomes that are within two or three years,” says Brewer. “They do not have economic models for complications that occur 20 or 30 years down the road, because you’ll surely be on someone else’s insurance plan at that point.”

“I’m going to commit to, and tie our price to, keeping people out of hospital. The value-proposition of Bigfoot is short-term, it is measurable, it is big. That will be the driver of payer acceptance.”

Brewer notes that five years ago there wasn’t the data to measure ER visits and tie them to insulin-dosing errors. Now private payers are becoming very data-driven. “I’m going to commit to, and tie our price to, keeping people out of hospital. The value-proposition of Bigfoot is short-term, it is measurable, it is big. That will be the driver of payer acceptance.”

More than this, Brewer is not planning on an expensive long clinical trial to prove these outcomes to payers. “Payers are skeptical that [such trials can] roll out to the world and have the same benefits,” he says. “I’m going to guarantee certain performance measures for [the] population and we’ll go at risk.” Brewer plans to bet the company on the savings he will deliver to payers. “I’m already signing up these agreements [with private payers]. Literally two-and-a-half years from the marketplace, we’re sitting down with payers and preparing to do this now. They are looking to do value-based care but no-one is willing to sell them what they want.”

The acquisition of Asante, early on and for a relative bargain, was an important accelerator for Bigfoot, as is the signing of agreements with private payers. Brewer is focused on execution. This is his biggest concern. Bigfoot needs to own the pump since it must embed intelligence, connectivity, and security into its system for it to deliver on its value proposition. Elsewhere, it is looking to partner. Abbott is its choice for continuous glucose sensing, and Ypsomed for linesets. Ultimately, Bigfoot is an integrator driven by forward progress and capital efficiency. It doesn’t want to build anything that already exists.

“We’re not trying to change everything. If you need a fax, we’ll send you a fax.”

Despite the ambition to change the experience of insulin management, Brewer acknowledges “the need to fit gracefully with the way the system works today.” As with his approach to partnering, this observation comes across as both confident and humble. Brewer knows where Bigfoot is strong, where it can partner, how it can interface. “We’re not trying to change everything. If you need a fax, we’ll send you a fax.”

Brewer constantly refers to his timeline, but he’s also looking beyond commercial launch and beyond diabetes. “As the world becomes more quantified, a huge productivity storm is going to be unleashed in healthcare. Three years from now, everyone will be saying that what Bigfoot is doing, they knew it all along.”